The word astrology comes from the early Latin word astrologia, which derives from the Greek ἀστρολογία—from ἄστρον Astron(“star”) and -λογία -logia, (“study of”—”account of the stars”). Astrologia later passed into meaning ‘star-divination’ with Astronomia used for the scientific term. 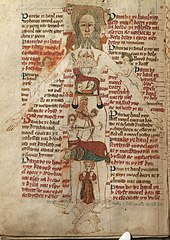 The Zodiac Man a diagram of a human body and astrological symbols with instructions explaining the importance of astrology from a medical perspective. From a 15th-century Welsh manuscript

Many cultures have attached importance to astronomical events, and the Indians, Chinese, and Maya developed elaborate systems for predicting terrestrial events from celestial observations. In the West, astrology most often consists of a system of horoscopes purporting to explain aspects of a person’s personality and predict future events in their life based on the positions of the sun, moon, and other celestial objects at the time of their birth. The majority of professional astrologers rely on such systems.

Astrology has been dated to at least the 2nd millennium BCE, with roots in calendrical systems used to predict seasonal shifts and to interpret celestial cycles as signs of divine communications. A form of astrology was practiced in the first dynasty of Mesopotamia (1950–1651 BCE). Vedāṅga Jyotiṣa is one of the earliest known Hindu texts on astronomy and astrology (Jyotisha). The text is dated between 1400 BCE to final centuries BCE by various scholars according to astronomical and linguistic evidence. Chinese astrology was elaborated in the Zhou dynasty (1046–256 BCE).

Hellenistic astrology after 332 BCE mixed Babylonian astrology with Egyptian Decanic astrology in Alexandria, creating horoscopic astrology. Alexander the Great’s conquest of Asia allowed astrology to spread to Ancient Greece and Rome. In Rome, astrology was associated with ‘Chaldean wisdom’. After the conquest of Alexandria in the 7th century, astrology was taken up by Islamic scholars, and Hellenistic texts were translated into Arabic and Persian. In the 12th century, Arabic texts were imported to Europe and translated into Latin. Major astronomers including Tycho Brahe, Johannes Kepler, and Galileo practiced as court astrologers. Astrological references appear in literature in the works of poets such as Dante Alighieri and Geoffrey Chaucer, and of playwrights such as Christopher Marlowe and William Shakespeare.

Throughout most of its history, astrology was considered a scholarly tradition. It was accepted in political and academic contexts and was connected with other studies, such as astronomy, alchemy, meteorology, and medicine. At the end of the 17th century, new scientific concepts in astronomy and physics (such as heliocentrism and Newtonian mechanics) called astrology into question. Astrology thus lost its academic and theoretical standing, and common belief in astrology has largely declined.